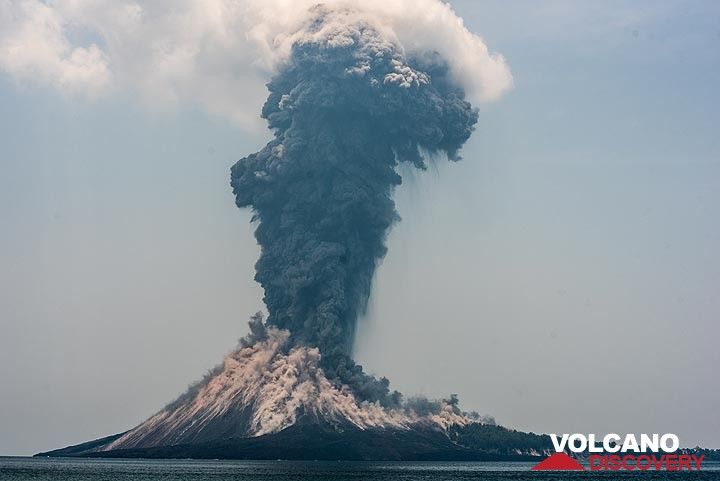 « Previous · Next »
Perhaps the most powerful explosion during our 6-days stay was this one at 11:59 local time on 17 Oct, sending a shower of bombs until the forest, the beach and the nearby waters of Anak Krakatau. (Photo: Tom Pfeiffer)
Thumbnails↑ · ↑↑Gallery Index
Copyright: Tom Pfeiffer / www.volcano-photo.com
Contact: Email
File: krakatau_k18583.jpg | Hits | + 28 similar images

Participant on our Krakatau Volcano Special tour managed to capture this extraordinary explosion, which involved a small lateral blast, by video. The video has gone viral since it was first published. It shows a place that now no longer exists: two months later, the cone collapsed into the sea and caused a deadly tsunami that hit Java's west coast. An event like this might well have been a final trigger for this to happen.

Land of Theseus
The Saronic Gulf opposite Athens is one of the most beautiful and interesting areas of Greece, full of beautiful landscapes, small towns, islands, archeological remains and one of Europe's least known active volcanic areas. Join us on a relaxing tour to discover this fascinating area!
Shiveluch 16-24 Mar

Earthquakes near volcanoes
Earthquakes often precede volcanic eruptions. Find out where the latest earthquakes in the vicinity of volcanoes have occurred.
Largest volcano

Do you know which is the biggest volcano in the world?
Volcano Videos

Watch videos from our volcano trips
Get the ad-free version!
Why is there advertising on this site?
Copyrights: VolcanoDiscovery and other sources as noted.
Use of material: Most texts and images, in particular photographs, on this website are protected by copyright. Further reproduction and use of without authorization is usually not consented. If you are not sure or need licensing rights for photographs, for example for publications and commercial use, please contact us.
Home | Travel | Destinations | Volcanoes | Photos | Earthquakes | About | Glossary | News | Contact | Privacy - change consent | Imprint | EN | DE | EL | ES | FR | IT | RU
Follow us: